Take Appium testing to the next level with Appium Studio

Mobile test automation is crucial because constant app releases and updates require shorter release cycles while retaining high quality. Appium open source is the developer’s choice but suffers from an inability to scale up conveniently. Appium Studio helps address the challenges in Appium testing and is available as a free community edition.

The digital age makes it necessary for companies to constantly create new experiences for their customers through websites and mobile apps. While user experience on all channels needs to be high quality, the mobile technology landscape makes testing mobile apps a real challenge. This is due to the staggering amount of device models, OS versions and screen resolutions that need to be taken into consideration.

The pressure for short application delivery cycles is driving the need for wider mobile automation. With the rise of mobile Automation came the rise of Appium open source.

Appium has gained popularity over the past few years due to the fact that it is an open source test automation tool built for mobile apps, which works for both Android and iOS. Another factor attributing to this popularity is the fact that Appium is based on the Selenium Webdriver.  While having great potential there are many challenges in Appium testing that make it unsuitable for effective, high scale test automation.

Enter Appium Studio (https://goo.gl/WXsD2m), an augmented version of open-source Appium, created by Experitest that improves on Appium testing and makes it simpler and more effective. It is a free community tool with strong community support that comes in the form of the forum and online self-training sessions. Appium Studio addresses the core challenges inherent in Appium testing and helps organizations release high-quality mobile apps in less time.

The core challenges that have been addressed with Appium Studio start with the complex installation and setup. This is mitigated with the easy to download and install .exe file for Appium Studio which gives users the ability to set up and start creating tests within minutes.

With Appium Studio you can test outside of your application which allows for any use case to be tested. This includes native, web, hybrid and third-party apps.

Enterprises are also able to meet the demands of their app users with Appium Studio (https://goo.gl/WXsD2m) by being able to test on new operating systems from the beta version stage. Appium’s lack of dedicated support means catching up with new operating systems and versions can take weeks or even months. This is especially critical since we know that more than 50% of users upgrade within 3 weeks of new OS release! 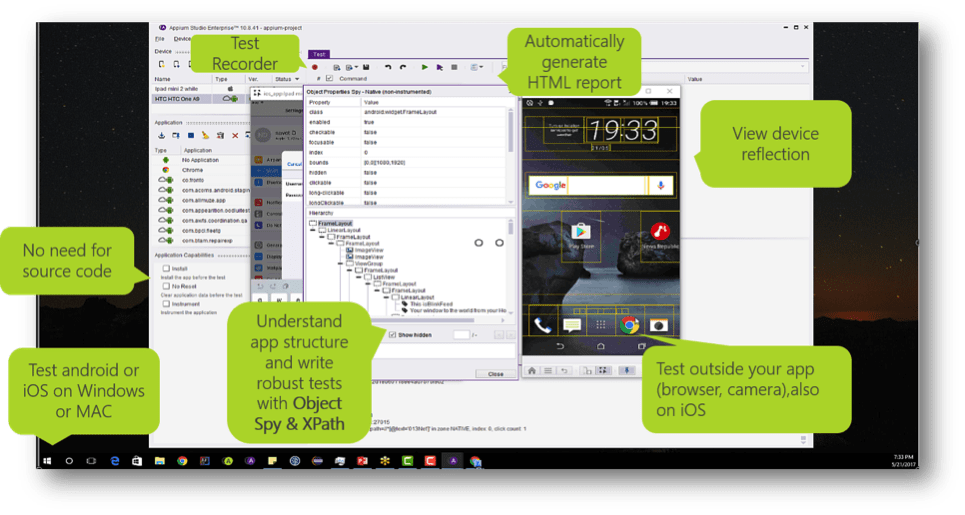 Install and setup within minutes

Once installed using the downloadable .exe file, you can connect iOS or Android devices via USB to either a Windows or Mac machine and begin testing. Mobile devices can be interacted with as if they are held in a developer’s hand using the device reflection. Installing and working with applications is as easy as uploading an IPA or APK file and installing them onto the device.  For iOS devices, the device provisioning process is included, just like XCode does for developers.

Create an Appium test with Ease

Creating tests is simple as well. The test recorder allows users to interact with their locally connected devices and record each action as a step in a test.  It is a fast and intuitive process and by being able to see what you are doing via the device reflection, an error-free process as well. Once a test is created and executed Appium Studio (https://goo.gl/WXsD2m) automatically generates detailed reports with step by step results that include screenshots, device logs, and non-functional data like device vitals consumption. These reports are shareable between DevOps team members and result in faster bug investigation and root cause analysis which cuts down on resolution times dramatically.

One of the major difficulties in test automation is writing maintainable tests that run on different versions of an application. Appium Studio (https://goo.gl/WXsD2m) helps you do this quickly using the Object Spy and its’ unique XPath algorithms. The Object Spy highlights elements to distinguish between them and the unique XPath of each element is provided as well. This makes editing tests for different application versions much more intuitive. 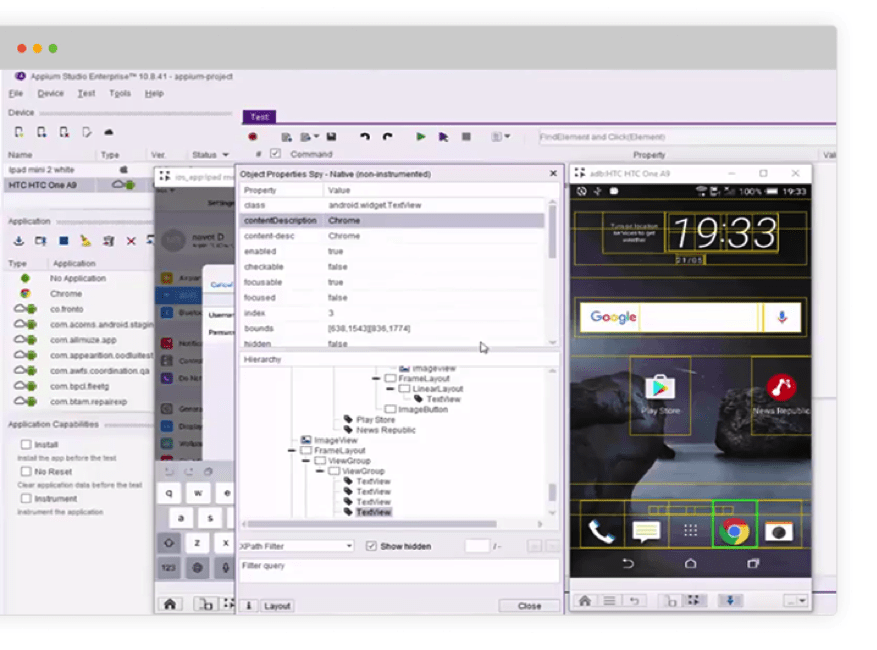 In order to make large-scale test execution a reality Appium Studio (https://goo.gl/WXsD2m) can be integrated with any IDE and tests can be written in any language including Java C# Ruby and Python.

When you are ready to carry out your large scale automated tests you can do this on a large matrix of devices using the SeeTest Digital Assurance Lab (https://goo.gl/oQ8aEb). Once you are connected to the lab you can select the devices you wish to test on and when your test suite is being executed you can watch the tests being carried out in real time on the device reflections in the Digital Assurance Lab. 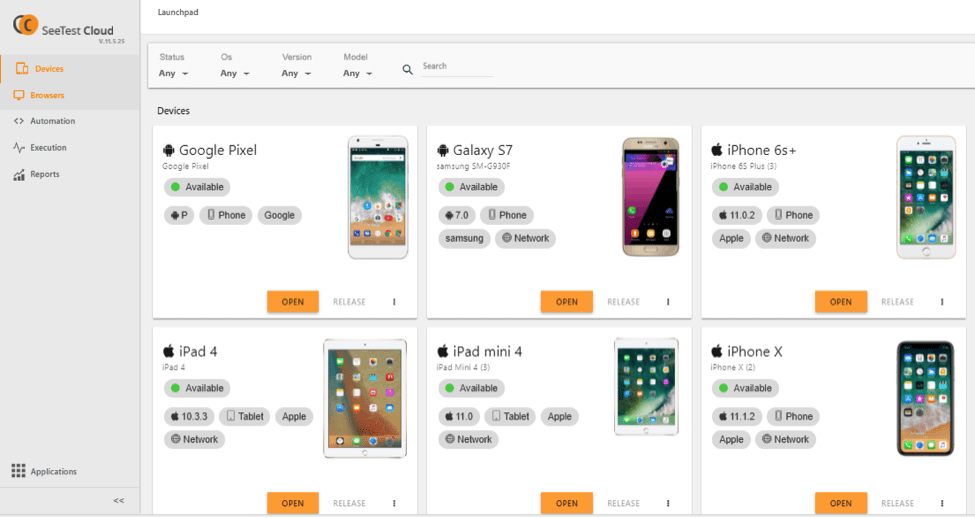 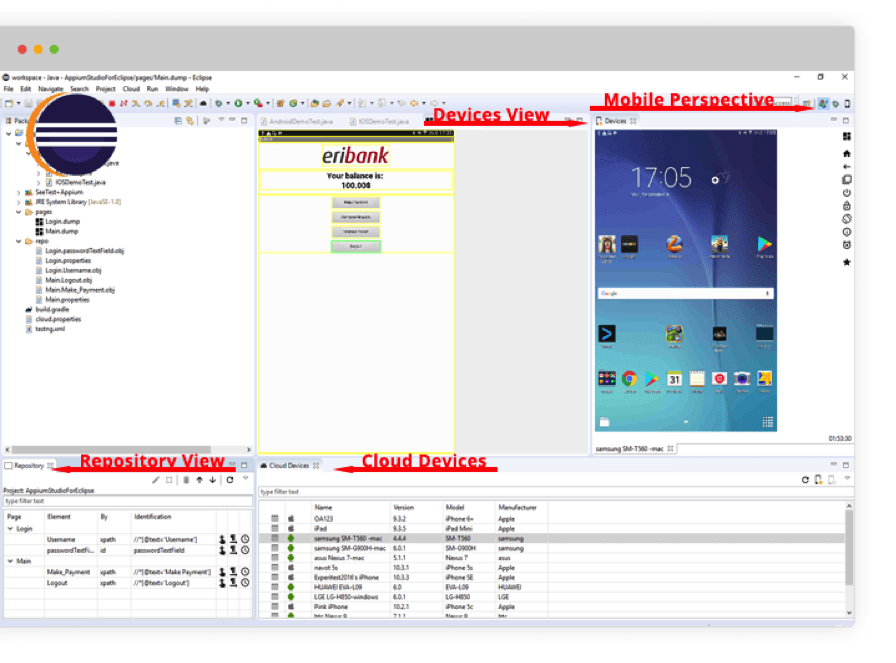